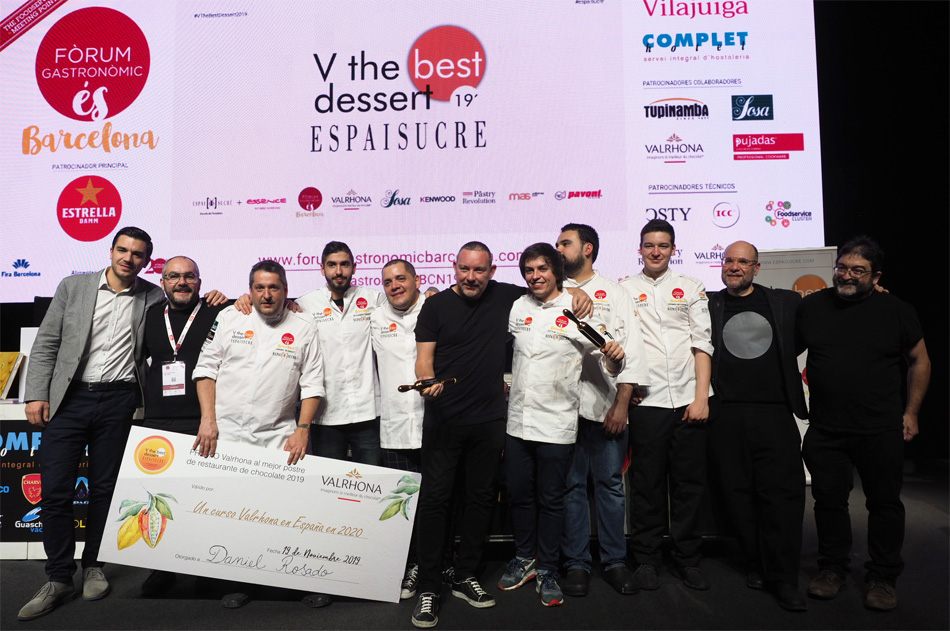 Remember that this competition is held every year, with the goal of highlighting restaurant pastry-making, offering participants the chance to aspire to the "Best Restaurant Dessert de Espaisucre 2019 Award" and the "Valrhona Award", the brand that sponsored this second award which requires the creation of desserts using Grand Cru Brazil's Macaé 62% topping.

Of the six participants of this fifth edition, Víctor Gonzalo, with the desserts entitled “Citrus x Limón” was proclaimed the winner of the competition, being awarded the “The Best Dessert Restaurant de Espaisucre 2019” award, after winning over the judging panel made up of: Albert Adrià (Tickets *), Jordi Cruz (Àbac ***), Jordi Roca (El Celler de Can Roca ***), René Frank (CODA, Berlín) and Jordi Butrón and Xano Saguer (Essence by Espaisucre).

Victor Gonzalo, pastry chef of the Restaurant Àbac, described his dish as "lemon with hints of citrus and cereals”. The dish makes a reference to the scientific name of its star product: the lemon.

In terms of its composition, we would highlight: the lemon cream, lemon meringue, citronella, yoghurt sponge with lemon essential oil and baked lemon butter ice cream. You can see all the ingredients the chef used to make this exquisite dessert by following this link.

The winner of the second award, the Valrhona Award, was Daniel Rosado, chef of the restaurant Casa Ana Maria de Ollers (Girona), who presented the dessert called “Chococo”. This daring entry included exotic ingredients with a very innovative presentation.

In addition to the competition and prize-giving of the fifth edition of the Awards, homage was paid to Albert Adrià, chef of the restaurants Tiquets * and Enigma *, through the Pierre Gagnaire Award in recognition of his career, which was given to him by his son Álex Adrià.

Finally, we would like to congratulate all the participants who presented and shared their knowledge through delicious desserts loaded with inspirational value for many gastronomy professionals: Nariman Abdygapparov, Federico Guajardo, Eduardo Llop and Alejandro Santafé.