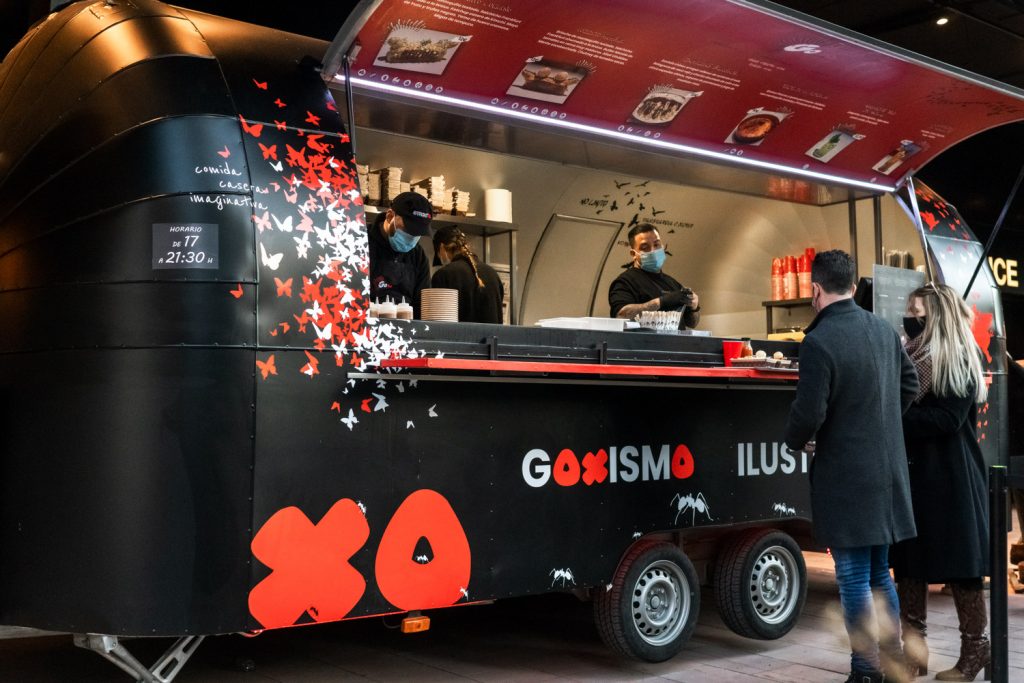 Dabiz Muñoz, the only three-starred chef in Madrid, has not only brought the food from his restaurant to the homes of his diners with the delivery service, both in Madrid and Barcelona, but he has also expanded his gastronomic offer and has made his debut in the world of the food trucks with the GoXO, located in front of the Corte Inglés in Castellana (Madrid), where we can find his most casual, street and affordable concept with the offer of Asian-inspired street food, without losing at any time the mindset and philosophy of his personal style.

The menu, not too extensive and aimed at a walk-by public, is made up of six items: two types of hot dogs, a portion of cheesecake, another one of dumplings and finally, two types of cocktails. The food is served in disposable packaging so that customers can take the food anywhere, or eat it at one of the eleven small tables that have been made available, and inside the foodtruck there are eight chefs dressed in black and moving frantically to attend to a queue that continues to grow and crosses the entire square.

As Dabiz Muñoz explains, the foodtruck tries to give a "new dimension" to a cuisine that had no place either at DiverXO, his three Michelin starred restaurant, or at StreetXO, his version of street food in Madrid and London. "If the quarantine has helped me at all, it's to realise that I'm happy cooking. I don't give more importance to any one project over another, because the level of demand at GoXO is the same as that of DiverXO and StreetXO, even though they compete in different leagues", says the chef. In the same way that he wants to make his DiverXO restaurant "the best restaurant in the world", he wants to serve "the best hot dog in the world" in his food truck.

The food truck of a three Michelin Star restaurant is one more project of the many examples of creativity and reinvention inside the gastronomic sector, which is not giving up in the face of the current situation. Bravo!